Safety experts from the Machinists Union and America’s largest airlines gathered in Seattle this week with the purpose of creating a safer environment for airline workers and travelers.

The event has become one of the largest and most influential safety conferences of its kind, attracting top thinkers and decision-makers from the world of commercial aviation.

This year, attendees toured the Boeing Factory in Everett, Washington. The plant is one of the largest aircraft manufacturing facilities in North America and home to thousands of Machinists Union members. 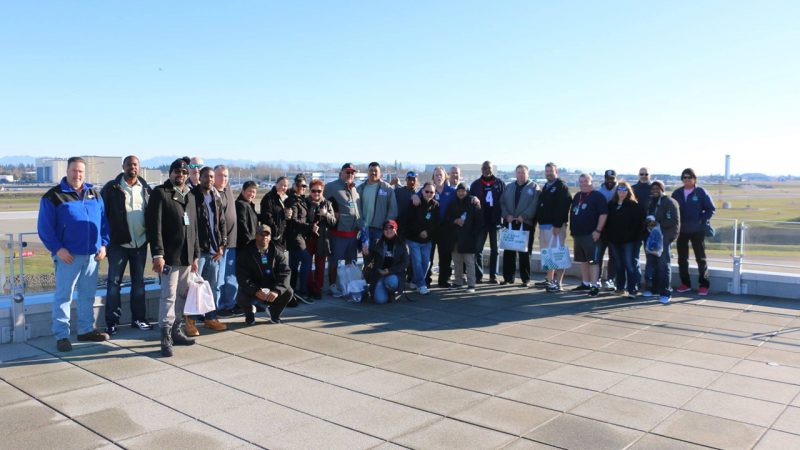 Participants included representatives from airlines represented by the IAM, including United and American. The two carriers are working together with the union to develop new safety reporting standards at American Airlines.

Erik Stenberg, Director of Safety for IAM District 141, commended the companies for their efforts to improve airline safety, saying, “There is no ‘us’ and ‘them’ when it comes to protecting our members and the flying public. We can have both a safe workplace and an on-time operation. But, we can’t have an on-time operation without safety.”

Airline representatives also praised the opportunities created by assembling so many experts, company decision-makers, and union leaders at the same venue, to work on the topic of safety together.

“I think that this is a great example of team building,” said United Airlines Safety Supervisor Gary Snead. “We are building from what we started last year, and you can just feel the unity that we’ve been able to create.”

The IAM 141 Safety Conference is an annual event, organized by District 141 of the Machinists Union, the largest union of airline and aerospace workers in the world.